The Artist In Cédric Mizero

On a sunny Thursday afternoon, one week before the seventh edition of the Kigali Fashion Week (KFW) in June, the city looks as though it’s November. Mid-year, most people seem busy as creatives unfold their wings to plan for some of the annual biggest shows, mainly for the dry season—the “summer.”

At the age of 22 (born on 25 May 1994), Cédric Mizero is doing what many young Rwandan artists—at least those who live in the capital—hardly do today. Armed with what appears to be the commonly used materials in the past decade and a half or so, he is making imagination seem obvious. His work focuses on haute couture, fusing design skills and art to make “new, unique, beautiful, self-explanatory” garments, he explains.

For the third consecutive time, Cédric was among the twenty-two fashionistas whose creations were presented at the week-long fashion events.

I met with him in early-June at a local café, where he used to work as a waiter, to discuss his art, his vision and how he plans to take his work to the next level.

Cédric was born and raised in the south-western town of Cyangugu, now Rusizi district, which shares borders with Bukavu in DRC. As a child, he went to primary school wearing a khaki shirt and shorts, as school uniform, sewed by his mother. She was a tailor, he says, and she inspired him to do what he does as a growing stylist.

He ventured into the fashion-art scenes in 2012, working with talented artists Fahad Ndangiza, who runs Iwacu Arts Gallery in Musanze, and peer Jemima Kakizi. He also worked with top-model Musie Tekle, who won Rwanda’s first modelling competition. During his last years of high school, he was involved in a small student-organisation called Fashion Killers. Together with his colleagues, they trained and mentored young girls who wanted to become fashion models—many of whom are now participating in leading fashion events in Kigali. At that time, he also got recognised at the High School Idol, with the Fashion Designer and Agency award. A short take but significant accomplishment.

As I spoke with him, I tried to understand what motivates him and what other things interest him. But it all revolved around art. “I am involved in several stuff,” he told me. “I also do commercial modelling with local marketing agencies.” In fact, he’s appeared on this year’s billboard that advertises the sixth edition of Rwanda’s leading music competition, the Primus Guma Guma Super Star, rocking an electric guitar. It’s a big deal, he says, and he hopes to keep working with “big brands.”

The young man looks distinguished in his style and physical appearance. Last time I saw him, he was carrying a bag that’s made with old pieces of khaki coffee sacks, mixed with some Kitenge material. He told me that he made it himself. I was fascinated, but not surprised. His long dreadlocks immediately give you an impression of a young artist with limitless ambitions and out-of-a-box. I jokingly asked him if he is a Rastafarian. “No, I am not.” he replied with a smiley face.

Not like many youngsters in this town, he seems to have close ties to what I would generally describe as cultural manners of discipline and respect. He still greets older people—not selectively, I noticed—using one hand to hold the other. He even usually does it with me, which at first *felt *a little bit embarrassing. I watched him do the same to many of the older people he met in the room, even with some of his friends.

During the last show of the Kigali Fashion Week, on Friday 24 June 2016, his designs were distinctive. He used the theme of “transformation” to offer an exotic collection at the show. One, a blue dress with a flowery flounce of yellowish design—revealed half-way the catwalk, as the model pulls down the skirt that covers her head, that previously left the view of a headless ostrich. Another, a long and light dress covering the body, with a circular shape at the bottom. When the bottom is pulled up, it transforms into a catchy design on-stage scenery. And more. 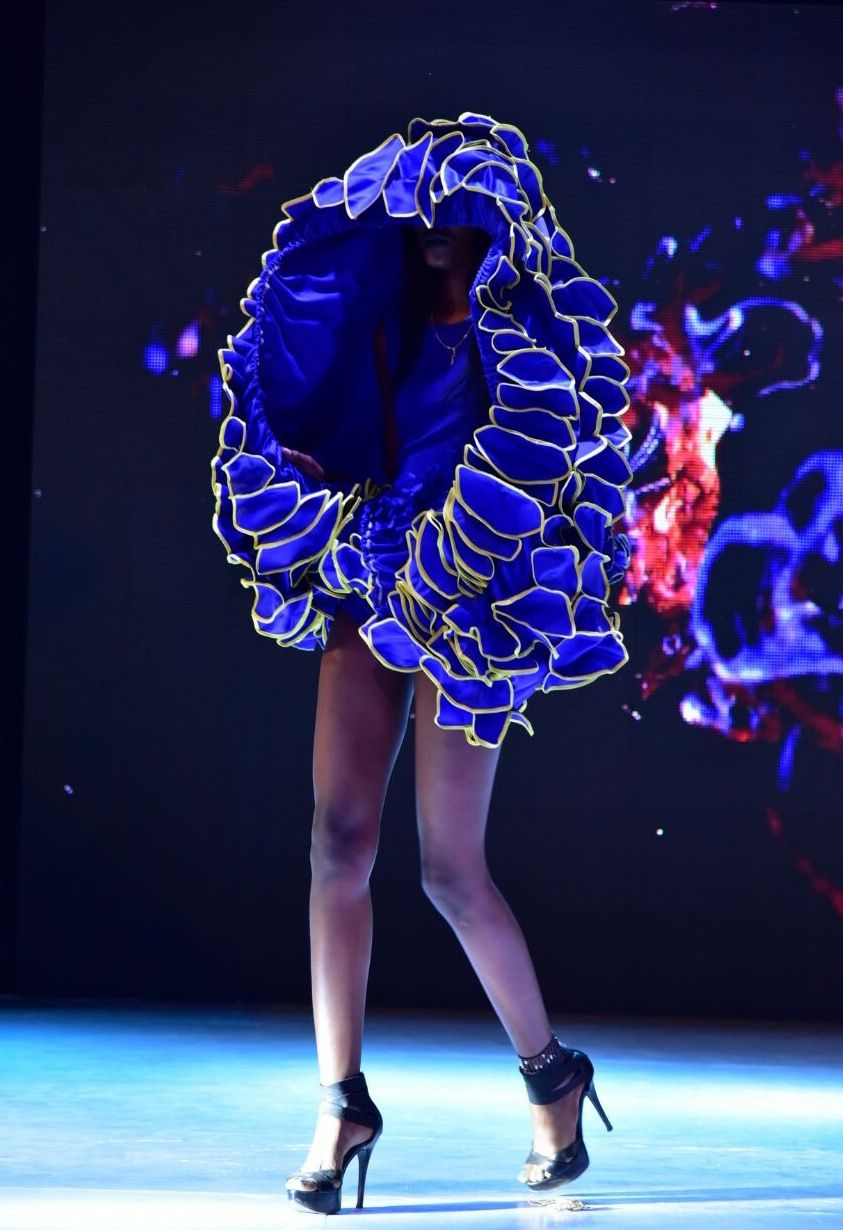 I asked John Munyeshuri, the founder of the Kigali Fashion Week, what makes Cédric stand out. “He is not scared to try new things and he always takes a risk to come up with something new every year.”

His discipline and hard work, Mr. Munyeshuri told me via email, will take him to places, guaranteed.

In early-August, he posted on his Instagram a series of pictures of his work in the countryside, an initiative he dubbed “fashion for all”—where he dresses elderly women using his creations and touch. Along the images, he writes, “a magic day in the countryside with my new project, #fashionforall. I am so proud to share my ideas and clothes with people all over Rwanda.”

I love my country, he continues, and this is my way to give something back. “Fashion should never be limited of age, size or social status,” he concluded. Hashtag ‘fashion for all'.

As a young artist, Cédric sees unlimited possibilities in every material he gets in contact with, and he is using his hands to showcase imagination, creativity and invent what the future holds. He is one to keep an eye on.

Have something to add to this story? Write to editor@kigalian.com

How Zipline Drones Will Improve Health Care in Rwanda

May we suggest a tag?

May we suggest an author?